Thanks for making 2020 a memorable year!

We’re closed for the season, but we will sell wine by the bottle from now until we open in the Spring of 2021.

We look forward to fully opening in the Spring of 2021.

Want to purchase a bottle of wine? Call (828) 837-7822 for an appointment, leave a message and we will contact you, or  contact us via our online form. 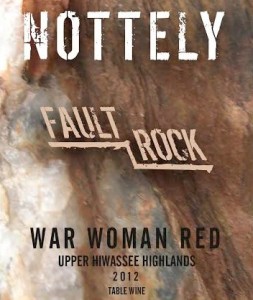 War Woman Red was the only wine produced in 2012.  We suffered a devastating freeze on April 12th, that killed all the fruiting buds for the year.  The only exception was that the Secondary Buds on some of the Cabernet Sauvignon, and Cabernet Franc survived. We were able to harvest a limited amount of fruit from those vines.  The 2012 War Woman Red is a 50/50 blend of these two grapes.  Styled as a typical French Table Wine.

You must be 21 years old to visit Nottely River Valley Vineyard's website.

We use cookies to ensure that we give you the best experience on our website. If you continue to use this site we will assume that you are happy with it.I understand